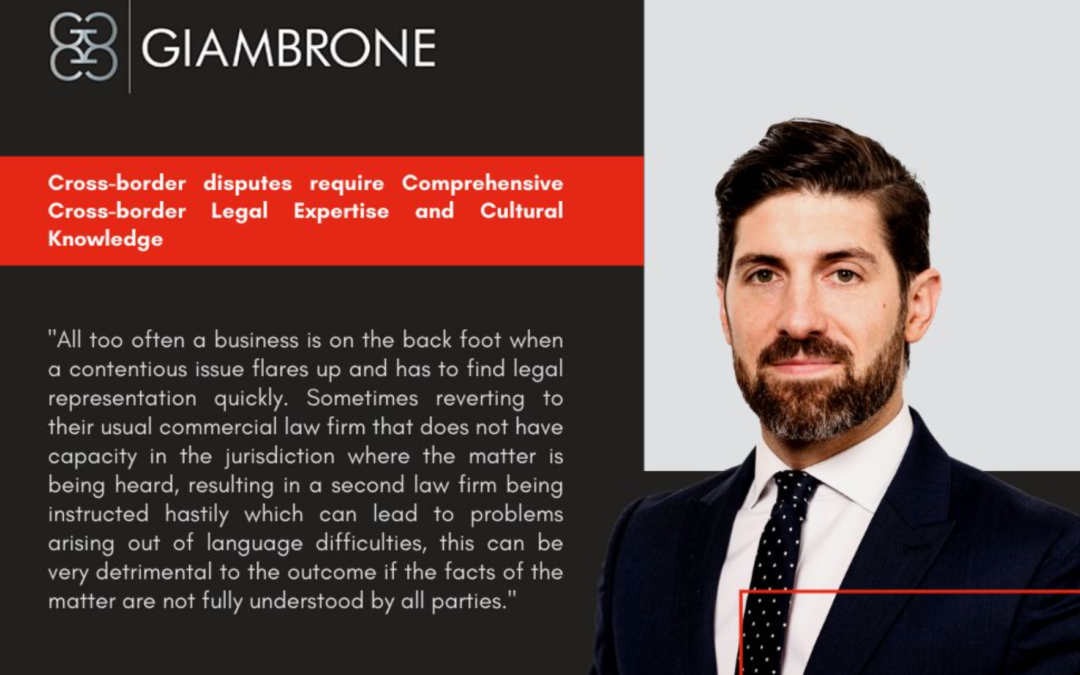 In the ever-increasing commercial globalisation, businesses not only face the prospect of cross-border disputes, during the course of which they must also tackle divergent jurisdictions and legal systems, regulatory variations and not infrequently a language barrier.

Giambrone & Partners, recognising the crucial importance of both speed of action and a cohesive strategy to address contentious cross-border issues,  has built a seamless service across our offices in Europe which provides multi-jurisdictional lawyer/advocates able to plead before the highest courts and who all speak a range of languages.  We can deliver with a comprehensive array of multi-jurisdictional expertise under one roof.  Our astute lawyers are dedicated to resolving complex cross-border litigation as efficiently as possible, wherever it arises internationally, to enable our clients to revert to their core business without the distraction and worry of a legal case over their heads.

The lawyers in Giambrone & Partners dispute resolution team always prefer negotiation to litigation and consider that their cultural knowledge of many countries is a key factor and assists in understanding  how to negotiate with opposition parties.

Gonzalo Butori, a partner based mainly between London, Barcelona and Naples, is an excellent example of the extent of the legal capacity within Giambrone & Partners.  Gonzalo is a Registered Foreign Lawyer (RFL) admitted to practise in England & Wales, he is admitted in to practice as an Abogado, a Spanish-qualified lawyer in Spain, as well as Avvocato Stabilito in Italy.  He has recently successfully assisted a British company with a complex cross-border dispute involving breach of contract against a European construction company; the claim amounted to over £400,000.  The case was compounded by the defendant being based out of jurisdiction.  The matter was heard before the High Court in England and Wales.

Gonzalo commented “many businesses add a jurisdictional clause in their contract naming England and Wales as the jurisdiction in which a dispute should be heard, as the London courts are perceived as fair and incorruptable. Ensuring that your contract includes a jurisdiction clause enables you to be fully prepared, including having a first class legal assistance available when needed.”  Gonzalo further remarked “all too often a business is on the back foot when a contentious issue flares up and has to find legal representation quickly. Sometimes reverting to their usual commercial law firm that does not have capacity in the jurisdiction where the matter is being heard, resulting in a second law firm being instructed hastily which can lead to problems arising out of language difficulties, this can be very detrimental to the outcome if the facts of the matter are not fully understood by all parties.”

Gonzalo is recognised for his focus on resolution for his clients as well as his robust capacity when pursuing his clients’ best interests. He has assisted in a number of cross-border transactions involving various EU jurisdictions and achieving highly successful results for his clients. He specialises in conflict of laws and jurisdiction.

Gonzalo also leads the Latin America LATAM Desk in London where the focus is assisting companies and individuals from South America with interests in the United Kingdom in a variety of matters including contract disputes as well as assistance for businesses wanting to enter new markets.

In addition to being admitted to practise in England & Wales as a Registered Foreign Lawyer (RFL), Gonzalo is admitted in to practice as an Abogado, a Spanish-qualified lawyer in Spain, as well as Avvocato Stabilito in Italy and divides his time between the London, Barcelona and Naples offices.

For more information on assistance with a cross-border dispute or commercial matter please contact his clerk sam.groome@giambronelaw.com.