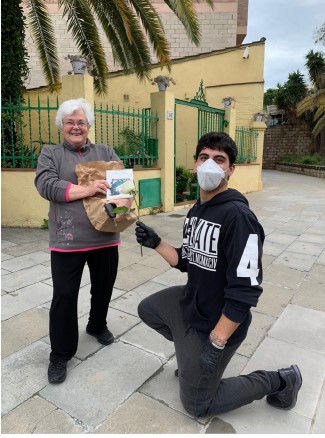 The Sagardi Group’s London restaurant, a member of the Spanish Chamber of Commerce in the UK, has reopened its doors!

This Basque restaurant was created in 1996 with the goal of seeking the gastronomic roots of its founders and offer high-quality, solid and authentic dishes. Over the years, this project has become a prestigious referent in the restaurant world, one that initially specialised in quality Basque cooking and today has diversified into other gastronomic cultures as well.

During the difficult times that we are living due to COVID-19, the Sagardi Group has helped the most vulnerable group of people, the elderly.

More than 150 volunteers, 7 social care entities, 25 providers of reliable food, 9 technical companies, actors, Txapeldun of the year, club members and all the technical, operational, gastronomic and the management body of the Sagardi Group have collaborated with the aim of reaching more than 2,800 grandfathers and grandmothers, cooking for all of them, under the following motto:

“WE CAN’T LET THE SICKNESS, LONELINESS AND ISOLATION TAKE ITS TOLL ON OUR OLDER GENERATION.

We want to put a good food on the table of every grandmother who needs it in our city, but not only that; we want to hug them, be by their side and give them company, affection and recognition.

WE ARE AND WE COOK AS OUR GRANDMOTHERS TAUGHT US.”

Sagardi Group has distributed more than 45,000 meals to older people to support them during the crisis of the COVID-19.

“Cap àvia sense un bon àpat” was a campaign by the Txapeldun Foundation directed to the most vulnerable group in society, the over-70s, with the aim of encouraging people to stay home and eat well.

From the Spanish Chamber of Commerce in the United Kingdom we would like to congratulate and thank the Sagardi Group for this initiative which has been so necessary throughout these difficult times.

From 1 August and throughout the month of August, they will join the UK government’s campaign to offer a discount of up to £10 for meals served at their restaurant on Mondays, Tuesdays and Wednesdays. If you are a member of their Txapeldun club you will be entitled to an additional 10% off on top of this.

We encourage you to visit Sagardi London ‘s website and their beautiful east London restaurant, which can be found at: